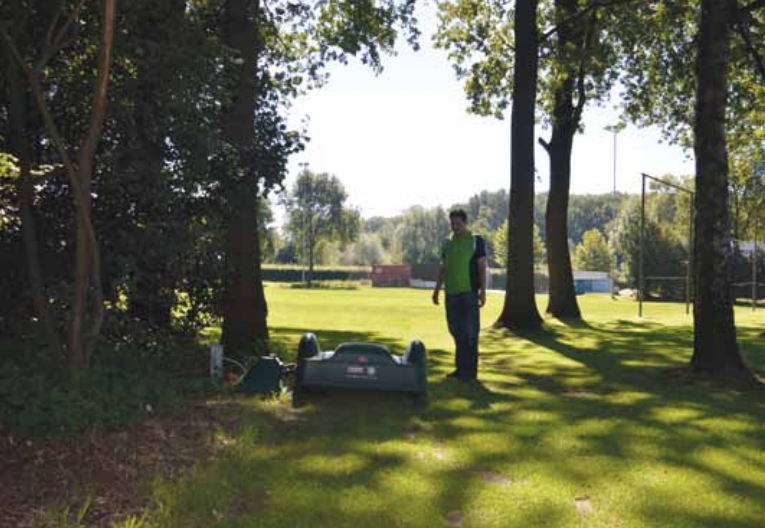 1A thicker, stronger grass carpet with no effort

The effects of the action of the robots on the grass are substantial. According to the observations of the administrator and the director, the carpet has changed: it is much thicker and stronger on the grounds maintained by robot mowers than on those using traditional mowing. The difference between the two carpets is almost one unit of atmospheric pressure. Thus there is less need for aeration, which reduces maintenance costs: “You have to carry out less aeration and you save on the cost of manual mowing and on dumping the clippings.”

2Professional setting-up for the charging stations

The robots were installed by the team from the regional reseller ATARO bv. This required special logistics. The location of the charging station must be planned in accordance with the zones to be covered. An analysis using Google Earth and meticulous examination was performed by the ATARO staff. In the majority of cases, they are positioned in the middle of the various areas to be mown. Each mower has its own route and adheres to the pre-programmed mowing zone.

The installation of the robots also requires a minimal adjustment to the management of the goal infrastructure. The goal nets must be raised so that the robots can pass underneath them. This operation has to be performed after each match. The teams must be kept informed and all work together to put this system in place.

4No thefts of robot mowers

Some people were sceptical about the potential for vandalism and theft of the robot. The management, and the volunteers too, were also afraid of the losing sight of the robot mower. Their fears were soon dispelled: the robots’ Track and Trace GPS system makes it possible to find out the exact position of the robots in real time. Furthermore, a robot cannot be used without the access code. The FAQ article about vandalism backs up these remarks.

Rapid resolution of the problem of unmown areas

The charging station powers two wires around 2 different, but adjacent, sections of ground. The sports ground staff noticed that a small section of ground was not mown. The perimeter wires for the 2 adjacent sections of ground were too far away and the robot was unable to reach the intermediate area to mow it. The problem was resolved by quickly reconfiguring the position of the wire.

Minor works in order to take 100% advantage of the robots

Is it possible to entrust the whole of the areas to be mown to the robots? Yes, but on condition that you make some arrangements. For example, we removed certain unnecessary guardrails so that the robot mowers could reach the edges of the ground. This allowed us to entrust the robot with a task we used to have to do by hand. Another minor operation was to tarmac over a tiny part of the grass, beneath the protective nets, again, so as to no longer have to mow those areas by hand. A quick job that did not affect the life of the club.

The club administrator confirms this: “At the outset, this requires a certain investment, but the years of satisfaction to come are totally worth it!” Quite impressively, he remarks too on the regrowth of the grass at the entrance to the ground. Even this mistreated area had enjoyed a new lease of life thanks to the action of the robot mowers.

Lastly, note that the Zevenaar sports infrastructures are open to the public. They are also used by schools or children’s vacation centres, for example. The intensity of repeated games was damaging the pitches. Since the robots have been brought into service, the surfaces are regenerated much faster and are impeccable for the football season.

Contact our teams for further information and a free quote for your club.